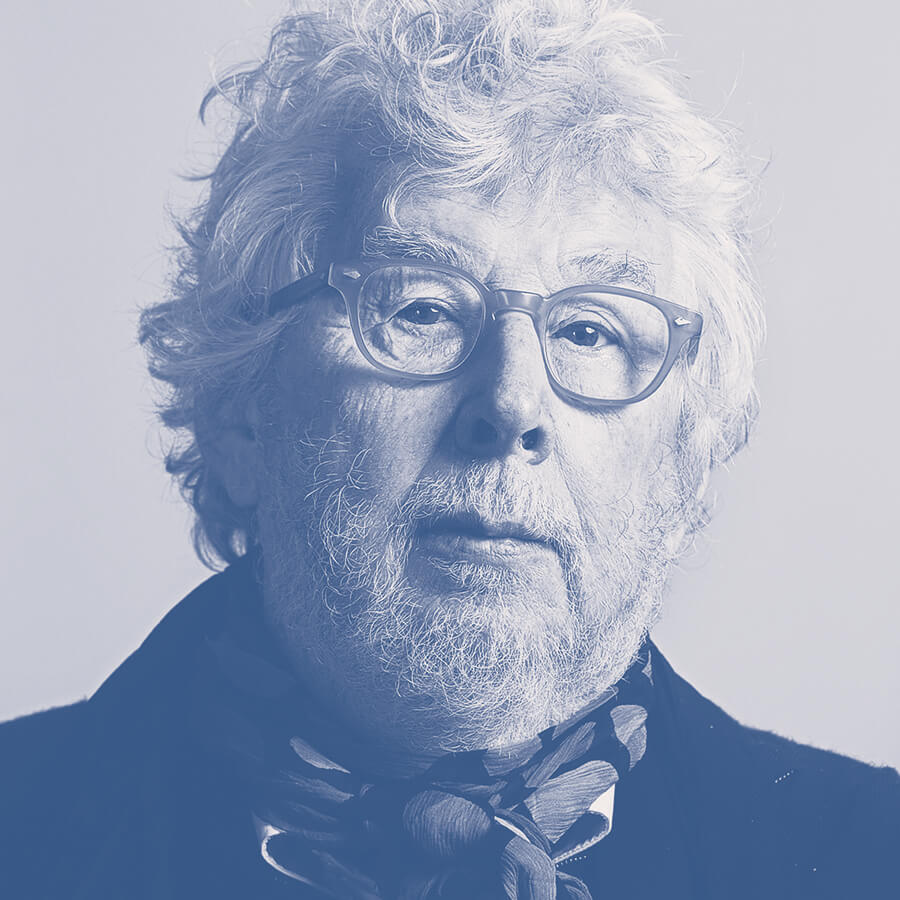 Sir Harrison Birtwistle CH studied clarinet and composition at the Royal Manchester College of Music. In 1965 he sold his clarinets to devote his efforts to composition when he completed the opera Punch and Judy. This work, together with Verses for Ensembles and The Triumph of Time, firmly established Birtwistle as a leading voice in British music.

The decade from 1973 to 1984 was dominated by the monumental lyric tragedy The Mask of Orpheus and by the series of remarkable ensemble scores: Secret Theatre, Silbury Air and Carmen Arcadiae Mechanicae Perpetuum. Large-scale works in the following decade included the operas Gawain and The Second Mrs Kong, the concertos Endless Parade for trumpet, the piano concerto Antiphonies, and Earth Dances.

Birtwistle’s works of recent decades include Exody, premiered by the Chicago Symphony and Daniel Barenboim, Panic which received a high profile premiere at the Last Night of the 1995 BBC Proms with an estimated worldwide audience of 100 million, and The Shadow of Night commissioned by the Cleveland Orchestra and Christoph von Dohnányi. The Last Supper received its first performances at the Deutsche Staatsoper in Berlin and at Glyndebourne in 2000. Pulse Shadows, a meditation for soprano, string quartet and chamber ensemble on poetry by Paul Celan, was released on disc by Teldec and won the 2002 Gramophone Award for best contemporary recording. Theseus Game, co-commissioned by RUHRtriennale,

Ensemble Modern and the London Sinfonietta, was premiered in 2003. The following year brought first performances of The Io Passion for Aldeburgh Almeida Opera and Night’s Black Bird commissioned by Roche for the Lucerne Festival. A disc featuring Night’s Black Bird has since won the 2011 Gramophone Contemporary Award and the 2012 BBC Music Magazine Premiere Recording award.

His opera The Minotaur received its premiere at the Royal Opera House Covent Garden in 2008 and has been released on DVD by Opus Arte. In 2009, his music theatre work The Corridor opened the Aldeburgh Festival and toured to the Southbank Centre and the Bregenz Festival, with further performances in New York and Amsterdam. Angel-Fighter for voices and ensemble was premiered at the Leipzig BachFest in June 2010, his new Concerto for Violin and Orchestra was premiered by the Boston Symphony and Christian Tetzlaff in 2011, as was In Broken Images jointly commissioned by MITO and the London Sinfonietta in celebration of the 150th Anniversary of the unification of Italy.

Recent compositions include Fantasia upon all the Notes (2012) for the Nash Ensemble, Gigue Machine (2012) for Nicolas Hodges, The Moth Requiem (2012) commissioned by Netherlands Chamber Choir, BBC and Danish Radio, Songs from the same Earth (2013) commissioned by the Royal Philharmonic Society, Construction with Guitar Player (2013) for Julian Bream Trust, Responses: Sweet disorder and the carefully careless (2014), the concerto for piano and orchestra premiered in his 80th birthday year (commissioned by Bavarian Radio, London Philharmonic, Casa da Musica Porto and Boston Symphony Orchestra). The Cure was premiered in 2015 by the Aldeburgh Music Festival and the Royal Opera House.

Current composing plans include The Silk House Sequences for the Arditti Quartet, ensemble pieces for the London Sinfonietta and Deep Time for symphony orchestra.

Birtwistle has received many honours and prizes, including the Grawemeyer Award in 1986 and the Siemens Prize in 1995; he was made a Chevalier de l’Ordre des Arts et des Lettres in 1986, awarded a British knighthood in 1988 and made a Companion of Honour in 2001. He was Henry Purcell Professor of Music at King’s College, University of London (1994-2002) and is currently Visiting Professor of Composition at the Royal Academy of Music in London. Recordings have been released on the Decca, Deutsche Grammophon, Teldec, Signum, NMC, CPO, Metronome and ECM labels.