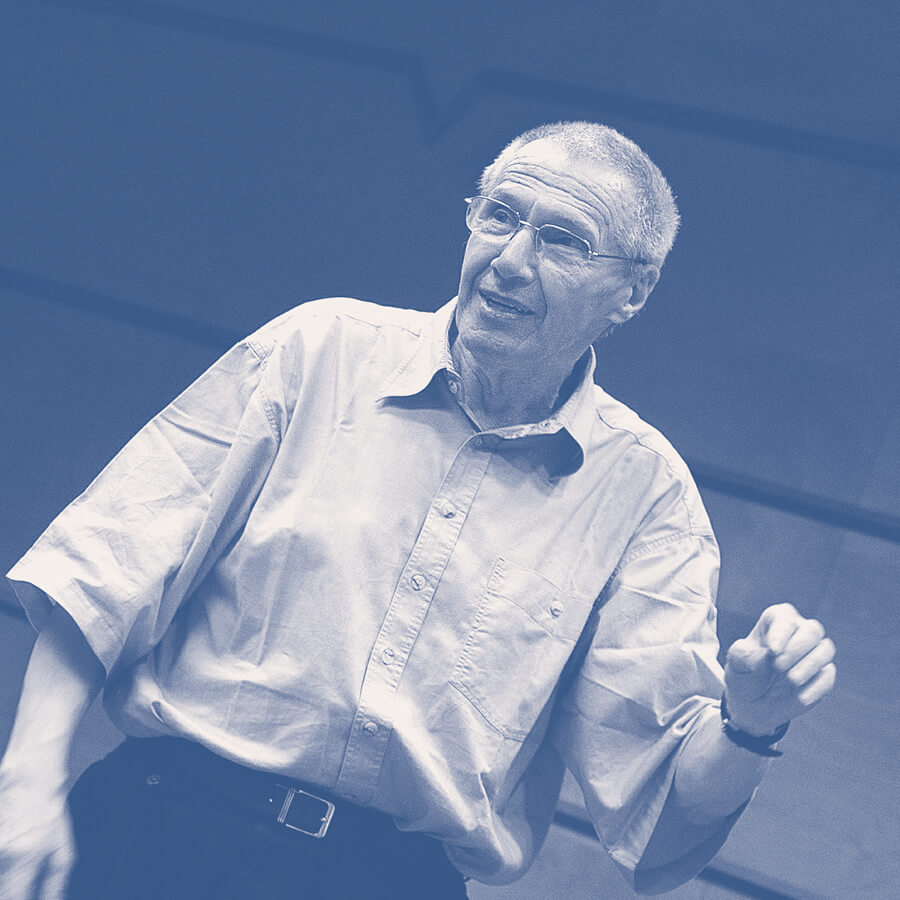 In 1946, he began his studies at the Ferenc Liszt Academy of Music in Budapest, where he met his wife, Márta, and also György Ligeti, who became a close friend. His piano teacher at the academy was Pál Kadosa; he studied chamber music with Leo Weiner and composition with Sándor Veress and Ferenc Farkas.

Following the Hungarian uprising in 1956, Kurtág’s time in Paris between 1957 and 1958 was of critical importance for him. Here, he studied with Olivier Messiaen and Darius Milhaud, and worked with the psychologist Marianne Stein – an encounter that strongly stimulated his artistic development. During this time he also discovered the works of Anton Webern and the plays of Samuel Beckett. The string quartet he composed in 1959 after his return to Budapest marks this crucial turning point; he refers to this piece as his Opus 1, the major work of this period.

Between 1960 and 1968, he worked as répétiteur at the National Philharmonia in Budapest. In 1967, he was appointed professor of piano and later also of chamber music at the Ferenc Liszt Academy of Mu­sic, where he taught until 1993.

Kurtág’s international reputation began to take hold with Messages of the Late Miss R. V. Troussova for soprano and chamber ensemble, which had its premiere in Paris in 1981. Since the early 1990s, he has worked abroad with increasing frequency: he was composer in residence at the Berlin Philharmonic Orchestra (199395) and the Vienna Konzerthausgesellschaft (1995). He then lived in the Netherlands (199698), again in Berlin (199899) and upon invitation by Ensemble Intercontemporain, Cité de la Musique and Festival d’Automne, in Paris (19992001). György Kurtág and his wife have lived near Bor­deaux since 2002.

The compositions before Opus 33, the orchestral work Stele dedicated to Claudio Abbado and the Berlin Philharmonic Orchestra, consist mainly of vocal solo and choral music, and of instrumental music, ranging from solo pieces to works for ensembles of increasing size. In several of Kurtág’s pieces, space plays an important role: … quasi una fantasia… premiered in 1988 at the Berlin Festival, is the first composition in which he explores the idea of music that spatially embraces the audience. Since Op. 33 a number of large scale compositions have been premiered, such as e.g. Messages Op. 34 and New Messages Op. 34a for orchestra, the Beckett settings … pas a pas — nulle part … Op. 35, the double concerto … concertante … Op. 42 and 6 Moments musicaux Op. 44 for string quartet. The recently completed large scale works include Four Poems by Anna Akhmatova Op. 41, Hipartita Op. 43 for violin solo and Colindă–Baladă Op. 46 for mixed choir and instruments.

Kurtág is the recipient of numerous awards, including the French title Officier des Arts et des Lettres in 1985, the Kossuth Award of the Hungarian government for his life’s achievement in 1996, the Aus­trian “Ehrenzeichen”, the ErnstvonSiemensMusic Prize in 1998 and the Ordre pour le mérite für Wissenschaft und Künste (Order of Merit in Science and Arts) in 1999. In addition, Kurtág is a member of the Bavarian Academy of Fine Arts, Munich, and of the Academy of Arts, Berlin (both since 1987), and he was named an Honorary Member of the American Academy of Arts and Letters in 2001. In 2006 he received the Grawemeyer Award for his composition …concertante… Op. 42 for violin, viola and orchestra.

Kurtág often holds masterclasses in chamber music, and appears in concerts together with his wife Márta. The couple plays an alwaysrenewing selection of pieces for two and four hands from Games and Transcriptions. The later volumes of Játékok [Games] bears the subtitle Diary Entries and Personal Messages. This reveals the lineage of the unique microcosmos, which irresistibly absorbs the listener when listening to Márta and György Kurtág performing together, with all the experiences of their playing working and living together for 65 years.

Most of Kurtág’s work is published by Editio Musica Budapest, and some at Universal Edition, Vienna.